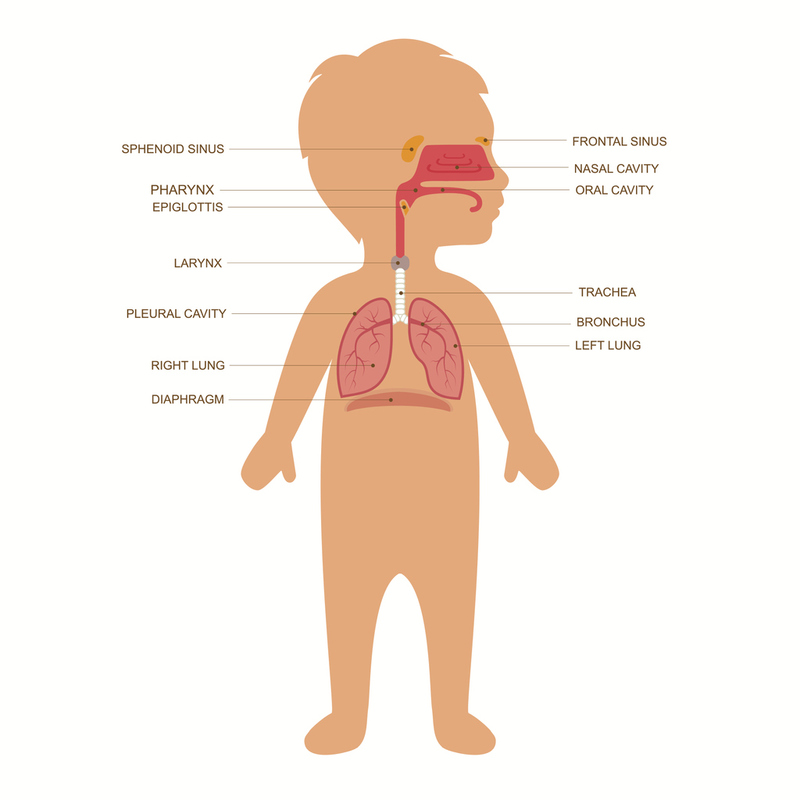 Pediatric airways are often challenging due to the size of the patient. With a smaller body size comes an increase in the precision needed to successfully maintain airway patency if any injury or insult to the airway occurs. This section will discuss specific anatomical and behavioral differences in pediatric airways and how they impact the most common airway interventions.

BODY PROPORTIONS: Pediatric patients have a larger tongue and occiput (head), proportionately to the rest of their body, as compared to adults. Therefore, they have a higher potential for the tongue to occlude the airway or the position of the head to constrict the airway than most adults.

LARYNX: The larynx and trachea are funnel-shaped in pediatric patients, as opposed to tube-shaped in adults. This allows for easier occlusion by foreign objects and choking.

NASAL/ORAL: Infants are "obligate nasal breathers" this means that they require a patent nasal airway to survive, this is due to the position of the palate and tongue in infants that allows them to suckle with minimal effort.

FEEDING: The process of suckling on a bottle or breast requires a patent nasal airway, as the child breathes through the nose while building up fluid in the mouth to swallow. Issues with the nasal airway can present as an inability to feed, or turning "blue" when feeding.

PROTECTING AIRWAY: The closing of the glottis in response to swallowing is an automatic reflex, known as airway protection. However, some young children may have structural differences in their airways/oropharynx that prevent the total closing of the glottis, this can lead to aspiration of fluid/food/medication. The pediatric bronchi bifurcate from the trachea at basically the same angle, which makes it possible for aspirate to be equally divided. This is in contrast to the adult bronchi, which bifurcate at different angles, making aspirate more likely to go down the right bronchus. The other

INTUBATION: The vocal cords of young children slant anteriorly which can result in a more difficult intubation. The position of the glottic opening in the larynx is also higher, often around C4 as opposed to C5, which affects the placement of cervical collars and airway devices.

TRAUMA:  As mentioned before, given the smaller size of pediatric airways relative to the rest of their body, minor swelling from trauma or medical conditions can lead to severe airway compromise. An example would be trauma from a seatbelt should the patient be improperly restrained (little kid in a big seat). Trauma to the larynx could cause swelling which could compromise the airway and make the application of an advanced airway by an ALS provider more difficult. External evidence could be an abrasion to the anterior neck from the seatbelt. These can also cause cervical spine injuries so be mindful of this should you discover these findings.