OPERATING ON THE SCENE OF A DISASTER 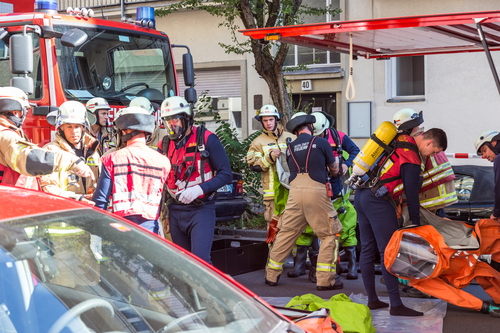 Risks and Responsibilities of Operating at a Natural or Man-Made Disaster.

If confronted with a natural or man-made disaster, EMS professionals will encounter the greatest challenges of their careers. Rare, many professionals may never encounter one; however, it is important for EMS professionals to study and be prepared for their occurrence because of the sheer magnitude and complexity of these events are overwhelming.

There are four major roles that emergency providers play in a Mass Casualty Incident:

NOTE: ICS is under the National Incident Management System (NIMS), a part of FEMA (which is part of Homeland Security).

First Priority to Responder Safety: Just like any other incident, the safety of responders is of the utmost importance when responding to natural or man-made disasters.

Before responding to any suspected terrorist incident, responders should position themselves uphill, upwind, and upstream of the incident to perform surveillance. If PD and FD have secured the scene, the ambulance should be parked at least 100 ft past the scene, uphill and upwind to secure the safety of ambulance personnel. In this position, the ambulance deflects and averts from the scene other vehicles that may strike the ambulance or the providers.

From a position of safety, responders can establish the incident command system, size up the scene, develop an incident action plan, and request additional resources.

It is likely that ordinary personal protective equipment will not provide enough protection to responders.

For most of the agents encountered, the use of specialized protective equipment will be required to protect responders, to include the use of a self-contained breathing apparatus (SCBA).

Time, Distance, and Shielding for Nuclear Agents: If responders encounter nuclear agents, time, distance, and shielding should be employed.

Inverse-square law: Move a little, protect a lot! Remember that in many situations (such as radiation) the lessening of damage is inversely proportional to the squaring of the distance. In other words, protection with distance is exponential, not just arithmetic: moving twice as far away will reduce your exposure by four times. Therefore, moving just a little bit farther away can make a BIG difference in your risk--even an extra inch!

Emergency Responders and Secondary Attacks: When responding to deliberate attacks, it is important to stay vigilant because responders will generally be targets for terrorists at mass casualty incidents. Additionally, responders should be aware of the potential for secondary devices or attacks. Secondary devices are those devices that are designed to be delayed in their activation to target unsuspecting responders and others rushing in to assist or "sight-see."

Making Patient Contact: When making patient contact, inform the patient of your actions and develop a plan to protect them from further harm.

This may include sheltering a patient in place or moving them to a position of additional safety.

If presented with treating a potential terrorist or criminal involved in the incident, it is incumbent on responders to put personal feeling aside and treat them as any other patient encountered.

Outward Signs of Terrorist Incidents, WMD's, and B-NICE: Response to a suspected terrorist event requires first responders to actively consider safety factors, observe the scene for hazards or attackers, and be efficient in treating patients.

During these incidents, the scene must be continually evaluated to detect developing threats or unforeseen challenges. Moreover, responders should be aware of the potential risks for terrorism at specific locations within their community.

Locations that present potential risks for terrorism include:

Additionally, be alert to the signs or symptoms of terrorist incidents, weapons of mass destruction, and biological, nuclear, incendiary, chemical, or explosive substances. These signs may present in two ways,

The following are examples of environmental indicators:

Animals, fish, or birds that are sick, dying, or dead may indicate the presence of a biological or chemical attack.

Although many biological and chemical agents cannot be seen with the naked eye, the substances in which they are suspended when dispersed may be visible for some time after an attack.

The terrorists who released Sarin in the Tokyo subway system (Aum Shinrikyo) merely poked holes in bags containing Sarin, then left the area as the poison leaked out.

Dispersal devices, lab equipment, or quantities of hazardous materials that are not typically located in the area may indicate that a terrorist attack is occurring or is about to occur.

Additionally, be alert to physical indications, for example:

This may indicate a biological or chemical attack.

Symptoms may range from difficulty breathing to skin necrosis to uncontrolled salivating, uncontrolled muscle twitching, or convulsions. All of these symptoms indicate that a chemical attack may have taken place.

The symptoms of many biological agents mimic the flu or other common illnesses. An unusually large number of persons seeking medical attention for the flu in July could indicate that a biological attack has taken place.

Responders should have mass casualty protocols in place for handling such situations. These protocols should be enacted to provide a guideline for responders to follow in handling these incidents.

INCIDENT COMMAND SYSTEM: If confronted with an MCI event, responders will need to establish the incident command system and scale it as needed.

Position themselves a safe distance away from the incident uphill, upwind, and upstream and perform surveillance and reconnaissance to determine the nature of the event.

Additionally, if B-NICE substances are suspected, responders will have to request additional resources, establish hot, warm, and cold zones for the incident, and provide protections for responders. An event of this complexity will be protracted and may take many hours if not days to resolve.

ALL-HAZARDS: MCI events should be approached with an all-hazards methodology. That is, responders should expect every potential hazard to be present at the incident and prepare accordingly.

Responders must provide a continual assessment of the incident and situation for the potential of secondary events or other hazards that may present themselves.

In general, events involving terrorists will require the establishment of a Unified Incident Command System to include fire, EMS, law enforcement, and other important stakeholders in the command decisions of the incident.

PERIMETERS: Perimeters should be established to contain the incident, protect rescuers, patients, and the public from the expansion of the incident or the spread of any agents that may be a part of the initial incident.

Additionally, responders should establish escape plans and mobilization points to protect them from additional threats and create centralized locations for additional resources to meet.