Nosebleeds and superficial injuries are extremely common, many patients never seek treatment, but in severe cases, these simple injuries can be just as life-threatening as any motor vehicle accident or penetrating injury. This section will review the common causes of and management of these conditions.

CAUSES: Nosebleeds can result from medical and traumatic causes. Dry mucous membranes and blunt force are the most common causes. These can be made more severe by underlying clotting disorders and medications (anticoagulants). More severe nosebleeds may be the result of inhalation of illicit substances, nasal infections, or basilar skull fractures from severe trauma.

ASSESSMENT: Assessment of nosebleeds should focus on the following factors: Events leading up to the bleed, presence of other medical conditions, medications being taken, associated symptoms (pain, vomiting, breathing difficulty), and the insufflation of recreational drugs via the nose.

MANAGEMENT: Stopping or slowing a nosebleed is all about compression and airway patency. This is complicated by the potential presence of C-spine trauma, unconsciousness, or facial fracture. Always maintain C-spine stability if it is indicated, watch for airway compromise by blood in unconscious patients, and be careful not to further displace any facial bone fragments.

Begin by tending to any direct threats to airway, breathing, or circulation. Assuming the patient is not on C-Spine precautions and is able to cooperate with instructions and position themselves, take the following steps:

If the patient is immobile (i.e. due to C-spine precautions) then other methods of stopping/slowing epistaxis may be required. Gentle external compression by the rescuer is possible while a patient is on a backboard. Highly packed cotton rolls called "rhino rockets" or "nose tampons" can be inserted to absorb blood and slow bleeding from the inside. Follow the protocols of your local jurisdiction on the use of these gauze rolls. 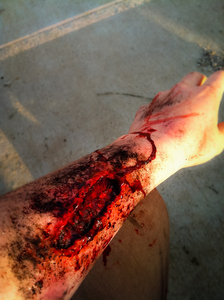 There are countless possible forms that soft tissue injuries can take. Regardless of the severity, these injuries are managed in the same way, with external compression and pressure.

Soft tissue injuries take many forms. Those that bleed externally are universally managed with compression and pressure dressings. All external dressings are a variation on this theme, the remainder of this section will discuss the differences between these modalities.

STERILE GAUZE: The simple placement of sterile gauze over a wound and applying pressure with a gloved hand is the go-to traumatic dressing for a wide variety of situations. Everything from scrapes to stab wounds can be served by this dressing. Never remove gauze that is soaked with blood, as this may disrupt a forming clot! More severe bleeding or patients that require the rescuer to use both hands for other interventions may require one of the more advanced interventions listed below.

SECURED GAUZE: This intervention replaces the source of compression, switching from the rescuer's hand to tape and a specialized pressure bandage. This can increase the pressure on the wound compared to a hand and allows the rescuer to attend to other injuries or interventions.

MECHANICAL SPLINTING: Certain wounds on extremities are amenable to the placement of rigid support over the gauze that is covering the wound. This offers support to any damaged bones, compression over a wide area, and can act as a partial tourniquet, further slowing the rate of bleeding.

PNEUMATIC TOURNIQUET: Often the simple inflation of a blood pressure cuff upstream of the injured blood vessels on a limb, the pneumatic tourniquet is a quickly adjustable method of cutting off the blood flow to an area. Often used for any form of arterial bleeding, tourniquets can reduce the internal bleeding that occurs with arterial injury to a limb. Whenever applying a tourniquet it is important to note the time of application, as this has implications for the patient's treatment later in the emergency room.

MECHANICAL TOURNIQUET: Using the same philosophy as a pneumatic tourniquet, the mechanical version is generally used for more severe bleeds. There are several types of mechanical devices and you should be familiar with the version that your jurisdiction requires you to carry. Mechanical tourniquets generally cause more trauma to tissue than pneumatic variants but are less prone to failure when used correctly.

COMPLICATIONS OF TOURNIQUETS: Placing a tourniquet (of any type) can result in temporary or permanent nerve damage in a matter of minutes, limiting their use to situations where direct compression has failed. Even if nerve damage is temporary, placement for over 2 hours often results in ischemic damage to the limb, with times over 6 hours generally requiring partial or complete amputation.

Keep bleeding patients calm, warm, and lying flat to prevent falls from sudden lightheadedness and further shock from hypothermia. Ensure that you complete the remainder of your assessment after you have stopped the bleeding, as secondary injuries may be present.

The prehospital management of bleeding at the EMR level revolves around holding pressure on the site to slow loss of blood and arranging rapid transport. At the EMT/Paramedic level administration of intravenous saline and/or blood, products are routinely warranted.

REASSESSMENT: Bleeding patients should be assessed for the development of blood loss symptoms often. Exactly how often depends on the severity of the bleeding. A patient with a minor capillary bleed will likely be fine all throughout transport. While a patient with a major arterial bleed may require interventions on a minute by minute basis to keep them alive.

Some of the symptoms that signify a transition from mild blood loss to clinically significant blood loss are: Weakening pulses in the extremities, fatigue, somnolence, pale/cold/clammy skin, increasing tachycardia, shortness of breath at rest, and changing mental status (confusion, aggression, inappropriate laughter).

These symptoms should be noted and recorded for a patient with known or suspected blood loss.

[This topic is reviewed further in "Body Response and General Assessment of Bleeding."]